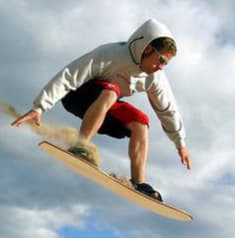 What Makes a Sand Dune?

What Makes a Sand Dune?


A sand dune is the product of two factors, the building material, (sand) and the force that structures the dune, (wind). Let us first consider the building blocks of the dunes... SAND, consisting of billions of tiny grains of rock and other elements. Sand is so common to our planet it can be found on every continent. Sand reaches into deserts, beaches, mountains, forests and rivers. Most of it is on, and actually is, the bottom of the sea. Sand is the liberation of the core, the edge and the surface of rock, claimed by its sister, the water, to tumult and angle, slow and quickly dash ever downward in the wonderous dance called erosion.

To be classifed as sand, a particle must measure between 1/12 and 5/100s of an inch in diameter. The majority of all sand is made of quartz. Although quartz is quite hard, grains gradually wear smaller and rounder as they are washed and blown about the earth. Some sand dunes are made of grains other than quartz. At White Sands, New Mexico USA, for instance, dunes are made of gypsum. With all sand, the smaller the grains are, the faster and farther they will travel. The smallest of grains are so light in weight they encounter each other without chipping in the least. Incredibly durable, grains of sand may be millions of years old. Much of the Earth's sand never reaches the otherwise inevitable sea, but deposits on river banks and plains, gently coming to rest at the rivers delta, where it may spend eternity, the river holding tight its possesion. Sand could take thousands of years to move only a few hundred miles . Wind however is the force that moves the grains skyward to join them together in a dune, a tall and mysterious structure that obeys the constant force and direction of the wind to shape a dune. A crystal mountain...waiting.