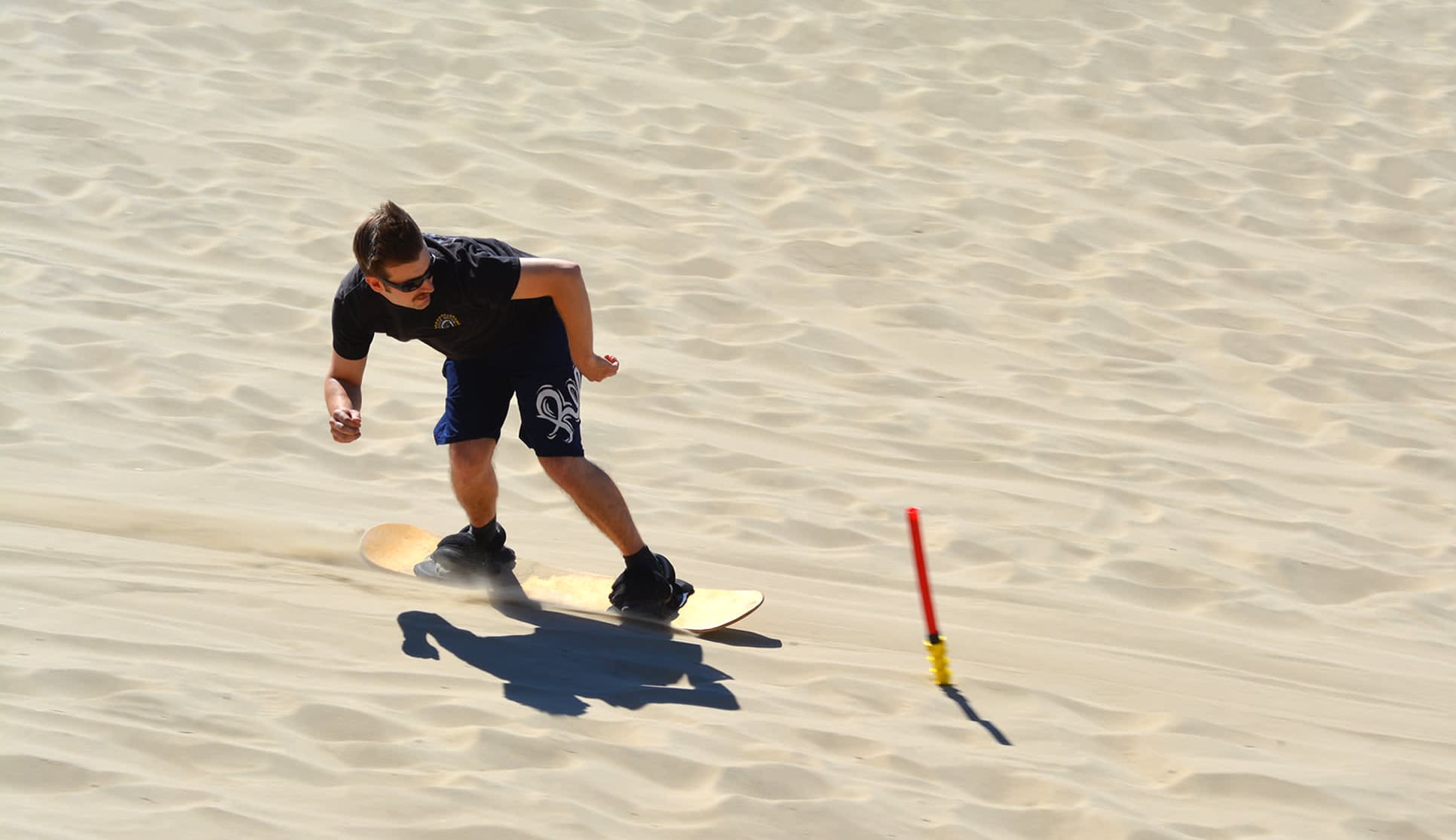 What is the history of Sandboarding?

Like many, you may consider sandboarding to be the "latest" in board sports. In a sense, it is new and still relatively unknown. However, sandboarding is not so "late" as the word might imply. Sources provide evidence of ancient Egyptians sliding down golden dunes of sand on planks of hardened pottery and wood. If this is accurate one begins to view the slopes of the pyramids and consider the possibilities. Rare yet still present B&W photographs of upright sandboarding date even as early as World War II.

Greatly influenced by the surf board, boards of every sort were soon to follow. The sandboard, like it's cousin the snowboard, made sense to many and found a permanent place in our efforts. Pieces of cardboard, car hoods, snow discs, old surfboards and water skis lent themselves to the quest for another 20 years. Through the 60's sandboarding began to gain momentum through surfers and skateboarders who found that riding the dune was not only challenging but was also great fun. Shaping wooden boards specifically for the sand was a natural and primitive boards were then ridden like a skate or surf board, naturally.


By the mid 1970s sandboarding had been introduced in a number of publications, ads and television sports segments thanks largely to the efforts of sandboard pioneers, Jack Smith, (to those of you who know your skate history this is the same man) , along with the stylish riding of Gary Fluitt. But sandboarding was not to take its place at this time, no... snowboards quickly became the rage and abruptly pushed sandboards onto the back burner for another decade. Snow resorts were already operating with full facilities to cater to the masses. The ski industry and others were more than willing to offer a new twist to a proven past time and greatly boost revenues. And snow, like surf, was available at a good number of locations world wide. Snowboarding raced ahead.

A passion for the dunes continued to burned for those who preferred to ride sand over snow. One such person was Sandboard Magazine's publisher, Lon Beale. During the spring of Â‘73 Lon was introduced to sandboarding through friends who migrated to the Mojave Desert, (home to many sand dunes). "A board that would glide over sand! I had to know everything I could find about it," relates Lon with a smile, "The quest had begun."


Lessons from the snowboard industry

In their infancy sandboards were slow and inconsistent performers on various types of sand and terrain. Improvements were necessary if sandboarding was to hold its own. As development of snowboards evolved so too did sandboards. "The similarities shared with snowboarding allowed us to capitalize on their research. You might say that sandboards were developed by all the best snowboard designers." claims board master, Pete Pilcic. "By keeping pace with the current technology we were able to bring the ride of a sandboard to the same level as surf/skate/snow without spending the dollars." While snowboards certainly influenced the sandboard's design various details needed to be rethought. The base surfaces used on snow were excellent but on sand proved to be disappointing. Improvements were vital to bring sandboard speeds up to par. One major improvement came in the form of a familiar surface material most commonly known by it's brand name, "Formica". Specially formulated waxes pushed acceleration to the next level. Now sandboards would streak to the bottom of even modest dunes at speeds that would terrify their passengers. We call it success.

Today "Sandboard Magazine" on line is the center for international and local sandboarding. It was at this point that the world, and the media, gained access to sandboarding. Through the availability surge of the INTERNET sandboarders came together for the first time from around the globe. Response came from all parts of Australia, New Zealand, Namibia, Egypt, Arabia, France, Italy, Germany, Hungary, Holland, Belgium, England, Japan, Peru, Chile, Argentina, Uruguay, Brazil, Canada and most every state of the US. "We found that there were several thousand sandboarders out there who were making boards and carving dunes completely unknown to each other thinking they were the only ones doing this crazy sandboard thing! They inspire us, and we build our magazine for them." Recognizing the impact the media quickly pursued. Soon, sandboarding was popping up in major publications, television commercials, boards and accessories were advertised, web sites multiplied and events leaped to life. It seemed the world was now ready for sandboarding!


For the fourth consecutive year the World Sandboard Championships were held at Monte Kaolino, Germany, (attendance 50,000) the "Sand Master Jam" at Dumont Dunes, California showcases the finest in international sandboarding, South American associations schedule dozens of competitions annually and adequately endowed resortsare now offering sandboarding to their patrons. The international governing body for sandboarding, Dune Rider International, notes much of the increased interest is due to the easy crossover making sandboarding appealing to boarders of all types. If you are boarding now you'll have little trouble adapting and sand is very forgiving. South Africa boasts a sand surfing school where many are taught the skills to sandboard, considered the best prelude to snow boarding. Interest is further fueled by performances of international competitors, such as Peru's Marco Malaga Muller and American Zac Dubel. The appeal of the extreme continues to grab the attention of an action hungry world and this "latest" board sport, sandboarding, has found itself on an international center stage. Yes, by all indications it appears sandboarding has finally come of age.

Can I use a Snow Board on the Sand?
Can I Make a Sandboard?
Which Sandboard is Right for Me?
Is Sand All The Same?
What is Friendly Sand?
What Makes a Sand Dune?